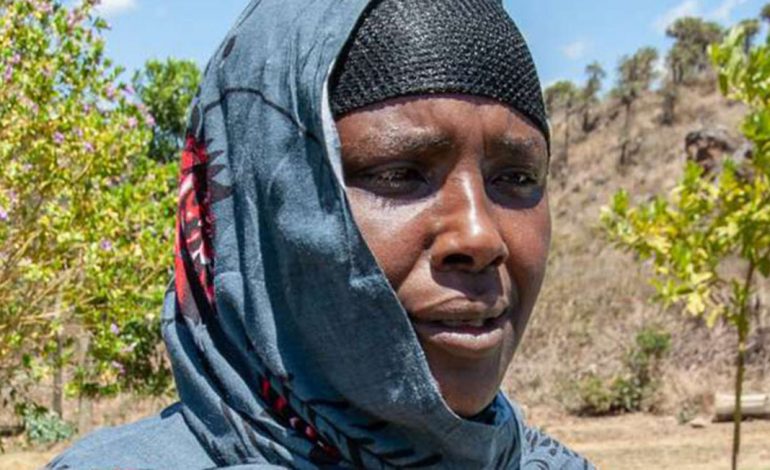 About 40km south of Lake Naivasha, in Moi Ndabibi village, farmers are lined up to fetch water from a neighbouring borehole owned by a flower farm.

Zainabu Malicha who is a member of Momaki green horticulture farmers group is among the water-stressed farmers. The vegetable farmer in the lower Lake Naivasha basin says it’s been a while since it rained here despite reports of heavy rains and flooding in other parts of the country.

She is among a number of farmers who came together to benefit from training on suitable farming practices, access to high quality certified seeds and links to markets.

The group is already reaping the gains of working jointly. Due to water scarcity, they have found opportunities in climate smart farming technologies such as drip irrigation, greenhouse farming and rain water harvesting.

The farmers have also adopted sustainable consumption and production practices which include use of certified seeds, adoption of sticky traps to manage pests, water pan, maximum use of organic manures, and proper post-harvest handling technologies which have enhanced their harvests and quality of produce.

Since early last year, Ms Malicha has been relying on drip irrigation to grow tomatoes which she sells to high-end hotels in Naivasha, Nakuru County.

Drip irrigation, according to the farmer, has been very crucial for her venture in the water-stressed region.

“Through the linkage, I am assured of a reliable market, constant pay and therefore able to plan my expenses including ploughing more into my farm,” she says.

“Before then, more than half of my harvest would go to waste while the rest was sold at a throw-away price due to lack of market.”

The technologies according to her has not only increased their productivity but also enhanced their net income as well.

The farmers say they were introduced to the climate smart technologies by World Wide Fund for Nature Kenya (WWF-Kenya) and the European Union.

But while many farming in Ms Malicha’s group have been enjoying the fruits of smart farming courtesy of a readily available market, the recent coronavirus outbreak has been a deal breaker.

Following the outbreak of the deadly pandemic that has slowed global economy and logistics, the government of Kenya imposed a raft of measures aimed at curbing the spread of the virus, among them restrictions of movement.

Naivasha County had confirmed at least five Covid-19 cases as of April 15.

Florence Muthoni, a member of the group, explains that they have had to sell their vegetables at the farm gate or to walk-in customers because the hotels they used to supply to have either closed doors or have drastically reduced orders.

“Our sales have dipped significantly since coronavirus outbreak was announced. Some of us have resorted to selling our farm produce in local kiosks which is both quite slow and less rewarding,” she says.

The farmers has in the past two weeks harvested more than 400 kilos of tomatoes which she sells at Sh50 a kilo.

While she can still manage to find an alternative market for her tomatoes, her biggest worry is the capsicum will she will begin harvesting next week.

“Unlike tomatoes which are largely consumed by our local customers, capsicum has no market here. I don’t know where I will take them,” she laments.

Despite the market access challenges, other farmers have found a means of navigating the deadlock by transporting their farm produce directly to Nairobi.

“Yesterday I brought 40 bags of carrot in lorry to Wakulima market. The business is quite slow because I spent the whole day there yet in the past I would be done by mid-morning hours,” he tells Enterprise.

The cut flowers, fresh vegetables and fruits are among the subsectors that have been hit hard by the Covid-19 pandemic.

The Ministry of Agriculture estimates that the vegetables and fruits markets have recorded up to 30 percent losses since Coronavirus outbreak while the cut-flower has witness almost 70 percent fall.

Flowers made the bulk of the earnings, bringing in Sh113 billion, with vegetables at Sh27 billion and fruits raking in Sh12 billion, according to government data.