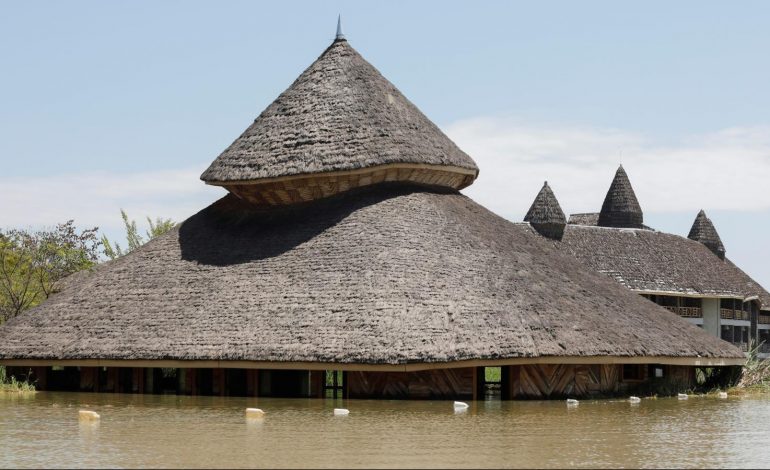 Over the years, the Rift Valley lakes in Eastern Africa have been vital in supporting livelihoods of local communities who depend on fishing, farming and livestock keeping. Apart from being a UNESCO world heritage site, the lakes are also a major tourist attraction destination with rich flora and fauna.

But recent rising levels of water in the lakes have become disastrous, displacing thousands of people. One of those displaced individuals is 60-year-old David Maragoli, a father of three. Maragoli invested his savings into buying a piece of land and building a brick house for his family in the Borut village in Nakuru, 165 kilometers west of Nairobi – Kenya’s capital city.

“I’m not employed anywhere, but all my savings from the hawking business, amounting to over 2 million KSh (USD 2,000), was lost here,” he said.

Climate change is one of the present day global challenges that is continuously exposing millions of people to persistent accumulation of vulnerabilities and risks such as flooding, droughts and land slides among other natural disasters.

The 2019 Global Report on Internal Displacement shows that Sub Saharan Africa recorded 2.6 million people were negatively impacted by weather-related disasters, more than any other region and accounting for 36% of all displacements worldwide.

A few months ago, the shore line of the lake was almost one kilometer away from Maragoli’s house, but in recent weeks waters have been submerging houses and farms at an alarming rate near his home. Maragoli said that drivable gravel roads in the village are no longer useful. People are now having to travel by boat as a new means of transportation to collect the remains of their homes, such as bricks, iron sheets and other building materials.

“It’s so sad, some weeks ago, I could load my belongings into a truck just in the compound, but now it is not accessible anymore – only by boat,” he added.

Even though the entire region of the Rift Valley is not experiencing heavy rain, several other lakes including Baringo, Naivasha, Bogoria, and Turkana among others are recording high levels of water, overflowing into the nearby settlements and displacing people, flooding farms, and destroying property.

John Hauwory, an independent consultant and geologist based in Nakuru, attributed these issues to the rapidly changing climate preceded by erratic rains, droughts and increased human activities in the watershed catchment areas.

“The anthropogenic activities coupled with meteorological activity in the Lake Nakuru basin and geological activities dispose the lake to flooding,” said Hauwory. He added that the impact of human activities in the lake’s catchment area has had a profound effect on the flooding risk.

Dickson Ritan, the assistant director of the Central Rift conservation area based in the Nakuru Kenya Wildlife Service Office (KWS) – a government agency, said that this year Lakes Nakuru and Baringo have recorded the highest levels of waters. He noted that the flooding in the lakes has not only affected livelihoods but also wildlife and tourism, most of the hotels have been closed down and the wildlife displaced.

“In almost all the Rift Valley’s lakes, water level has risen considerably, engulfing riparian areas which were previously pasture spaces for wildlife like hippos and buffalos,” Ritan explained.

He added that flooding is causing a serious impact on wildlife as most of them have been displaced. In Baringo and Nakuru, for instance, Ritan said that his organization is continuously monitoring the situation and has relocated the affected wildlife to flood free zones.

Reports indicate that floods in Lake Baringo have left more than 5,000 people homeless. The Kenya’s National Climate Change Action Plan indicates that the economic cost of floods and droughts in Kenya is estimated to create a long-term fiscal liability equivalent to between 2% and 2.8% of the country’s GDP every year. The costs of floods are estimated to be about 5.5% of GDP every seven years, while droughts account for 8% of GDP every five years.

Experts and geologists described the East Africa Rift System as the biggest rift on Earth. Its formation was as a result of hot volcanic magma separating the two tectonic plates creating Eastern Rift Valley and Western (Albertine) Rift Valley. Additionally, the formation of the great lakes of Eastern Africa is due to massive volcanic activities and depressions.

According to Hauwory, the Great Rift Valley lakes have diverse biodiversity that supports millions of people and wildlife. However, due to the fertile soil in the upper catchment areas, a large percentage of lands adjacent to these lakes experience intensive and unsustainable land use such as agriculture, infrastructure developments, deforestation and urbanization. Therefore, these becomes the source of erosion leading to massive uncontrollable sedimentation in the lakes.

“The soil has high porosity, permeability and loose structure, therefore, highly susceptible to erosion, land subsidence and fractures during or after heavy rain,” he noted. He further pointed out that widespread sediment deposition storage in these lakes end up occupying a lot of space, forcing water overflow like in the case of Lake Nakuru which is shallow.

“Due to high gradient in the catchment area, such as the Mau Forest Complex, the rate at which sedimentation takes place is too high, considering that most of these lakes do not have outlets, so the underground seepage is gradually filled with silt,” he said.

The International Union for Conservation of Nature shows that the Kenya Lake System is a habitat for endangered and threatened species. In addition, due to its alkalinity, Lakes Nakuru, Elementaita and Bogoria, enable the growth of food for wildlife. The biodiversity created supports approximately 75% of the global population of flamingos.

Ritan also revealed that the current rising level of water is a threat to aquatic life, like flamingos. In Lake Nakuru, water has already covered a 30 kilometer square area of land destabilizing the composition of biodiversity in the lakes.

“The water salinity has affected the growth of algae, mainly the red algae, which is the main food for flamingos,” Ritan said.

“When these food resources are threatened, this means aquatic animals are also affected. In particular, flamingos will be forced to migrate.”

He commented that his agency is doing continuous surveillance, as well as, sensitizing the public to tame human-wildlife conflict as a result of displaced animals. On the other hand, Hawoury pointed out their need for educating the public on sustainable land management, soil erosion prevention, and building flood controls in the lakes.

According to government officials, the government of Kenya has formed a multi-agency technical team to deliberate on the root cause of the problem. The team also will assess the environmental, social, and economic impact of the rising level of water in the region. In addition, they seek possible mitigation measures and a possible solution.

Wesley Langat is a freelance journalist passionately covering environment, climate change and agricultural reporting around East Africa and Horn of Africa. He is currently writing for various international media outlets including Thomson Reuters Foundation, Climate Home News, News Deeply and InsideOver among others.